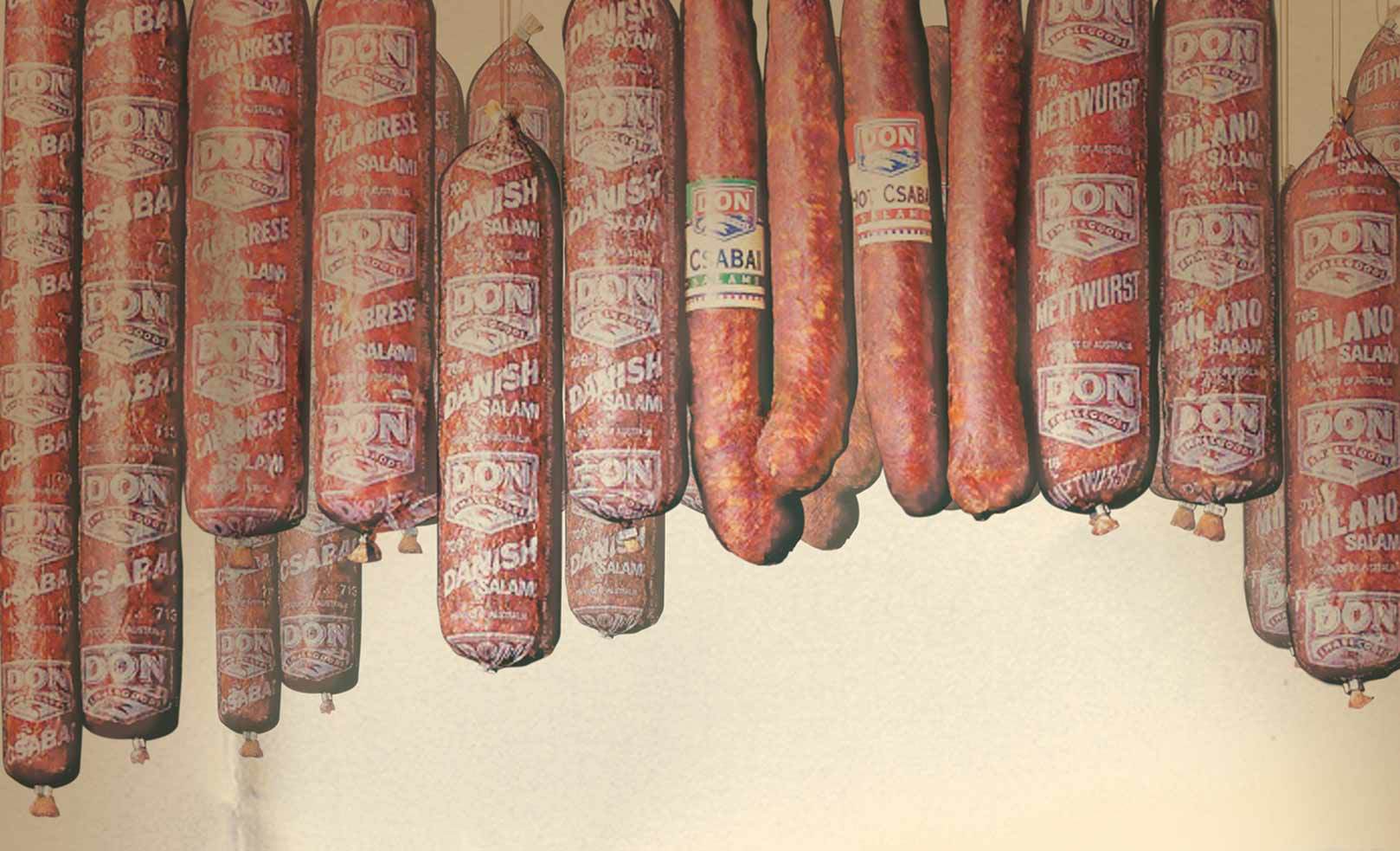 English
A traditional favourite made with lean boneless leg meat and cooked to perfection.
Champagne
Boneless, lean premium cuts of leg meat cured with traditional brine, then netted for smoking and cooking. Unfortunately it does not actually contain champagne!
Smoked
Traditionally, ham is smoked with timber, wood chips or sawdust in a special smokehouse. It may be referred to as double- or triple- smoked to denote a stronger smoke flavour, or use a particular wood type, e.g. hickory or oak.
Honey
Ham with a sweeter taste, which comes from real honey included in the recipe.

Ham is an excellent source of protein. Great for muscle building!

Virginian
Boneless, premium cuts of leg meat in a flat shape, which originates from country-style hams in the US state of Virginia.
COB (Cooked on the Bone):
Cooked on Bone (COB) hams are exactly that – ham made from the whole leg of the pig, cured, cooked and smoked with the bone still in place. Many of us would recognize this as a traditional Christmas ham. Their large size – 5kg to 12 kg, makes them perfect for serving a crowd.
Picnic Ham
This is not a true ham but a cut from the shoulder of the pig, which has been cured and smoked. It is not as lean or tender but is less expensive. A good choice when in need of chopped or diced ham to add to other dishes.

White Hungarian
A finely cut salami spiced with garlic and black pepper. Based on traditional recipes from Hungary, and recognisable by its white outer casing.

Hot Hungarian
A finely cut salami spiced with hot chilli, which is also based on traditional recipes from Hungary.
Calabrese
From Calabria in southern Italy, this salami is coarsely cut and uses the spicy chilli and peppers the region’s cuisine is famous for. One for the heat lovers!
Pepperoni
Originating from the Italian-American community and styled from Italian Calabrese. Pepperoni is smaller in diameter than other salamis and contains a spicy chilli and pepper blend for a rich, zesty flavour.
Danish
Of Danish origin and combines finely minced pork and beef with a mild, smoky flavour.

“Fleischermeister” is a German word for “Meat Master”. To become a fleischermeister, you must complete long apprenticeship, which also includes meat science school, learning from a qualified master. You can only attain this certification in Europe following years of practice and study.

Back in the early 1980’s, Don Smallgoods once held the record for the world’s longest and heaviest salami.

Strasburg
An Australian invention using a selected mix of pork, spices and herbs which is smoked and cooked to perfection.
Luncheon
Processed meats blended with spices. Luncheon is specific to England and Australia but different regions of Australia use different names such as Windsor, polony and Bologna. Bologna is also the name of a type of luncheon in America.

The sandwich was invented by John Montagu (1718-92), 4th Earl of Sandwich. He started the craze for eating meat between two slices of toast. What a legend!

Bung fritz
Famous in South Australia, the bung fritz combines pork with other selected meats and spices which are then filled into a sheep’s bung and hand-tied with string.
Pariser
Named after the French city of Paris, Pariser is a delicate, fine-cut luncheon meat flavoured with garlic. The finished product has a pale pink colour.
Berliner
The Berliner uses the same meat as Pariser, but a different casing. It does not originate from Berlin, as the name might suggest!

Shortcut
A popular, leaner bacon cut made from the loin of the pig, which has been cured and smoked for deliciousness.
Middle
The middle is a traditional Australian cut of bacon from the loin and belly area of the pig. It can be ‘rind on’ or ‘rindless’; the rind is the skin of the pig, also seen as crispy crackling on roast pork.
Pansize
A cut of bacon that includes the loin and a short length of the belly of the pig. This is a great choice as it balances the convenient size of short cut, with the extra flavour that comes from the fattier belly section.

Julius Caesar loved bacon so much, it is said that when travelling, he always carried his own bacon for meals. That might explain why he was stabbed; someone was after his supply!

Streaky
Made from the pork belly, streaky bacon has a higher percentage of fat, which means has plenty of flavour and crisps up nicely when cooked. American bacon is usually streaky bacon.
Real diced bacon
Conveniently pre-diced bacon, for a quick flavour addition to any meal. Look out for ‘real diced bacon’ as this means it has been made from proper bacon.

Classic Frankfurt
Pre-cooked, German-style sausage made with pork and other meats and a blend of mild spices, which is then smoked. Able to be grilled, boiled, steamed or barbecued.
Cocktail
A shorter version of the classic frankfurt and a party favourite.
Viennese
Hailing from Vienna in Austria, the Viennese frankfurt (or Weiner), has a darker red casing colour and a smoky flavour. Canned Viennese are a much-loved staple in the northern states of America, including the all-beef Chicago version and the world-famous Coney Island Hot Dogs!

The record for the longest sausage ever made is 59.14 kilometres (36.75 miles) long. At a normal walking pace, it would take 20 hours non-stop to walk from the beginning to end of that sausage!

Saveloy
Larger in diameter than a frankfurt, the saveloy is lightly spiced and often comes battered in UK-style fish and chip shops.
Skin on/skinless
This refers to the casing, which can be collagen or naturally sourced gut from hog or mutton. Skinless frankfurts are made in a casing which is peeled off immediately after cooking.

Chorizo
A rustic, coarse-cut sausage inspired by the exotic flavours of Spain. Numerous varieties are available; most are cured with a blend of smoky paprika, garlic and herbs.
Prosciutto
A typically thinly-sliced meat made from the leg of the pig which undergoes several weeks of salting and up to two years of air curing. The meat loses moisture to form a beautifully delicate, sweet, nutty and floral piece of meat with salt as the only additional ingredient.
Kabana
A spicy, smoked Australian continental made with pork and beef.

“Morcilla” is the Spanish answer to black pudding. It’s less firm than the traditional British version. So next time you’re in Spain, be sure to try this traditional continental!

Kransky
Based on the Slovenian recipe, the Kransky is a coarse-cut continental sausage made with pork and beef which is filled into a natural casing and smoked. It can also be flavoured with cheese or chilli.
Black pudding
A traditional blood sausage made with barley, delicate meats and pork blood, which gives the pudding its mineral flavour and dark colour. Black pudding is great with a big breakfast or scallops. French black pudding is known as ‘boudin noir’.